Plutonium has 15 isotopes with mass numbers ranging from 232 to 246. Isotopes of the same element have the same number of protons in their nuclei but differ by the number of neutrons. Since the chemical characteristics of an element are governed by the number of protons in the nucleus, which equals the number of electrons when the atom is electrically neutral (the usual elemental form at room temperature), all isotopes have nearly the same chemical characteristics. This means that in most cases it is very difficult to separate isotopes from each other by chemical techniques.

Only two plutonium isotopes have commercial and military applications. Plutonium-238, which is made in nuclear reactors from neptunium-237, is used to make compact thermoelectric generators; plutonium-239 is used for nuclear weapons and for energy; plutonium-241, although fissile, (see next paragraph) is impractical both as a nuclear fuel and a material for nuclear warheads. Some of the reasons are far higher cost , shorter half-life, and higher radioactivity than plutonium-239. Isotopes of plutonium with mass numbers 240 through 242 are made along with plutonium-239 in nuclear reactors, but they are contaminants with no commercial applications. In this fact sheet we focus on civilian and military plutonium (which are interchangeable in practice–see Table 5), which consist mainly of plutonium-239 mixed with varying amounts of other isotopes, notably plutonium-240, -241, and -242.

Plutonium-239 and plutonium-241 are fissile materials. This means that they can be split by both slow (ideally zero-energy) and fast neutrons into two new nuclei (with the concomitant release of energy) and more neutrons. Each fission of plutonium-239 resulting from a slow neutron absorption results in the production of a little more than two neutrons on the average. If at least one of these neutrons, on average, splits another plutonium nucleus, a sustained chain reaction is achieved.

The even isotopes, plutonium-238, -240, and -242 are not fissile but yet are fissionable–that is, they can only be split by high energy neutrons. Generally, fissionable but non-fissile isotopes cannot sustain chain reactions; plutonium-240 is an exception to that rule.

The amount of material necessary to achieve a critical mass depends on the geometry and the density of the material, among other factors. The critical mass of a bare sphere of plutonium-239 metal is about 10 kilograms. It can be considerably lowered in various ways.

The amount of plutonium used in fission weapons is in the 3 to 5 kilograms range. According to a recent Natural Resources Defense Council report(1), nuclear weapons with a destructive power of 1 kiloton can be built with as little as 1 kilogram of weapon grade plutonium(2). The smallest theoretical critical mass of plutonium-239 is only a few hundred grams. 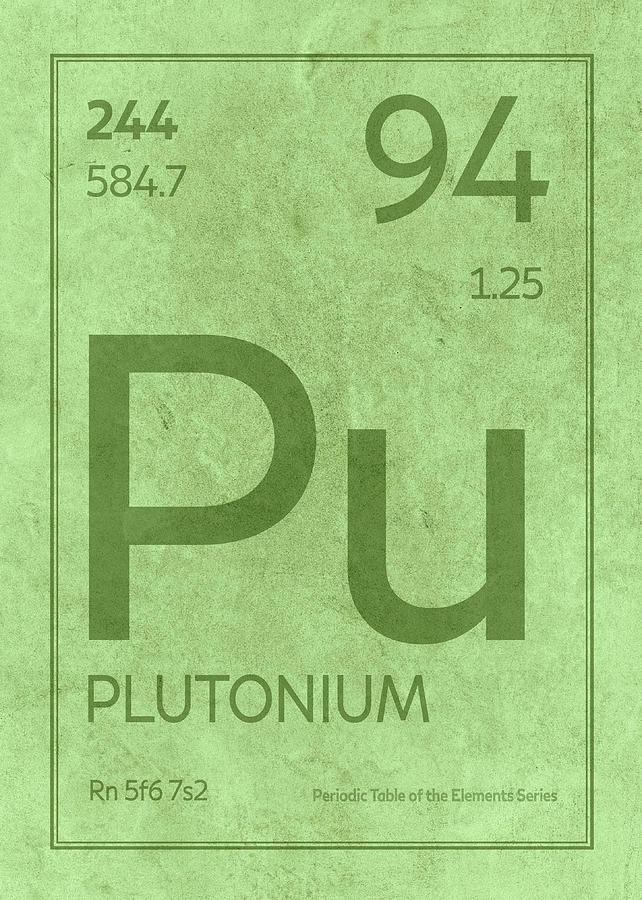 In contrast to nuclear weapons, nuclear reactors are designed to release energy in a sustained fashion over a long period of time. This means that the chain reaction must be controlled–that is, the number of neutrons produced needs to equal the number of neutrons absorbed. This balance is achieved by ensuring that each fission produces exactly one other fission.

The isotopes of plutonium that are relevant to the nuclear and commercial industries decay by the emission of alpha particles, beta particles, or spontaneous fission. Gamma radiation, which is penetrating electromagnetic radiation, is often associated with alpha and beta decays.

Chemical properties and hazards of plutonium.

Table 3 describes the chemical properties of plutonium in air. These properties are important because they affect the safety of storage and of operation during processing of plutonium. The oxidation of plutonium represents a health hazard since the resulting stable compound, plutonium dioxide is in particulate form that can be easily inhaled. It tends to stay in the lungs for long periods, and is also transported to other parts of the body. Ingestion of plutonium is considerably less dangerous since very little is absorbed while the rest passes through the digestive system.

Important Plutonium Compounds and their Uses

Plutonium combines with oxygen, carbon, and fluorine to form compounds which are used in the nuclear industry, either directly or as intermediates.

Formation and Grades of Plutonium-239

Plutonium-239 is formed in both civilian and military reactors from uranium-238.

The subsequent absorption of a neutron by plutonium-239 results in the formation of plutonium-240. Absorption of another neutron by plutonium-240 yields plutonium-241. The higher isotopes are formed in the same way. Since plutonium-239 is the first in a string of plutonium isotopes created from uranium-238 in a reactor, the longer a sample of uranium-238 is irradiated, the greater the percentage of heavier isotopes. Plutonium must be chemically separated from the fission products and remaining uranium in the irradiated reactor fuel. This chemical separation is called reprocessing.

Fuel in power reactors is irradiated for longer periods at higher power levels, called high “burn-up”, because it is fuel irradiation that generates the heat required for power production. If the goal is production of plutonium for military purposes then the “burn-up” is kept low so that the plutonium-239 produced is as pure as possible, that is, the formation of the higher isotopes, particularly plutonium-240, is kept to a minimum.

Plutonium has been classified into grades by the US DOE (Department of Energy) as shown in Table 5.

It is important to remember that this classification of plutonium according to grades is somewhat arbitrary. For example, although “fuel grade” and “reactor grade” are less suitable as weapons material than “weapon grade” plutonium, they can also be made into a nuclear weapon, although the yields are less predictable because of unwanted neutrons from spontaneous fission. The ability of countries to build nuclear arsenals from reactor grade plutonium is not just a theoretical construct. It is a proven fact. During a June 27, 1994 press conference, Secretary of Energy Hazel O’Leary revealed that in 1962 the United States conducted a successful test with “reactor grade” plutonium. All grades of plutonium can be used as weapons of radiological warfare which involve weapons that disperse radioactivity without a nuclear explosion.

Plutonium is a radioactive element which was produced in 1940. It is used as fuel in nuclear power reactors and to power aircraft. It is also used to make an atomic bomb.

Plutonium is a synthetic element and was produced and isolated in University of California, Berkeley. In 1940, Glenn T. Seasborg, Joseph W. Kennedy, Edwin McMillan and Arthur Wahl at Berkeley Radiation Laboratory, bombarded deuteron on an isotope of uranium in the 60-inch cyclotron, which created neptunium-238. Neptunium-238 has a half-life of little over two days and decay by beta emission forming the element 94 [1]. Due to world war the declaration of the discovery of new element was delayed until after the war. The element 94 was suggested to be named after the planet Pluto, following the tradition of naming the previous two planets after the planets of our galaxy, i.e. uranium after Uranus and neptunium after Neptune. Pluto was considered a planet of our milky way at that time, the next planet after Neptune.

Plutonium was discovered as a synthetic element. Only minor traces of plutonium occur naturally. It is commonly found in concentrated ores of uranium. Plutonium is formed in ores when U-238 undergoes spontaneous fission emitting energized neutrons which upon striking with nucleus of another U-238 atom is absorbed by it, making U-239 in the process. U-239 has short half-life and it decays into Np-239 which then decays to form Pu-239. Plutonium isotope Pu-244 has a long half-life of approximately 80 million years even then it is believed that all primordial form of the element on earth has decayed forming other elements [2]. It is produced only in supernovae and because of its half-life, which is longer than any other transuranic element, interstellar Pu-244 traces can be found in the deep-sea floor. Major source of plutonium for commercial uses is the burning of uranium in nuclear reactors. Since separation of plutonium isotope is difficult and expensive only particular isotopes are manufactured as per requirement.

Plutonium appears silver grey in colour. It tarnishes if exposed to air forming a dull coating on itself, while in humid air it expands forming hydrides and oxides. The powdered form of plutonium is pyrophoric. It has six allotropic forms. Plutonium allotropes have different densities and structures but have same internal energy making it sensitive to temperature and pressure changes [3]. This sensitivity to outer environment allows for dramatic volume changes and phase transitions from one form to another. This makes it difficult to machine.

Plutonium appears silver grey in colour. It tarnishes if exposed to air forming a dull coating on itself, while in humid air it expands forming hydrides and oxides. The powdered form of plutonium is pyrophoric. It has six allotropic forms. Plutonium allotropes have different densities and structures but have same internal energy making it sensitive to temperature and pressure changes [3]. This sensitivity to outer environment allows for dramatic volume changes and phase transitions from one form to another. This makes it difficult to machine.

Plutonium is radioactive element. It is also a toxic element. It is dangerous to handle since it can accumulate in bone / bone marrow. World is contaminated by plutonium oxide due to the extensive nuclear tests all around the world and some major nuclear accidents in our history.

If ingested, only small amount of plutonium will be absorbed by the body but it still can be dangerous. If inhaled, the lungs and liver are prone to diseases like cancer. Large quantity of inhaled plutonium or ingested plutonium will eventually irradiate internal human organs. Long term exposure to ionizing radiation released by plutonium can cause genetic damage, cancer, radiation sickness and even death. Metallic plutonium in finely divided form is also a fire hazard.

Plutonium has twenty known radioisotopes. Plutonium isotopes range in mass number from 228 to 247. Traces of plutonium isotopes Pu-238, Pu-239, Pu-240 and Pu-244 can be found naturally. Pu-244 has the longest half-life [4]. Pu-239 is the most abundantly existing isotope of plutonium, since it is purposefully manufactured for nuclear reactors and also for nuclear weaponry.